The village of Puylagarde has several distinctions. First, it’s the highest village in our département of Tarn-et-Garonne at 425 metres. On a clear day, you can see the Pyrénées to the south and the Monts du Cantal to the north east. Second, it has two châteaux. Admittedly, one of those is a châteaux d’eau, whose function is to distribute water under pressure of gravity. It is a landmark for miles around. The other is a fortified house, of whose existence I was barely aware until recently.

During the Caylus car rally in July (no, nothing like the Paris-Dakar), Puylagarde was one of the checkpoints.

Until the château was built in the 14th century, there was no village on the present site. People lived in a nearby hamlet called Lugan. However, the defensive possibilities of the Puylagarde site presumably made it worthwhile to build a castle there and, naturally, dwellings sprang up around it.

The château is now privately owned and parts of it have been demolished over the years. A peeling board attached to the front summarises its history, but being partially effaced it posed me a challenge in piecing the story together. The information board cites several names of successive seigneurs, which provided some clues. 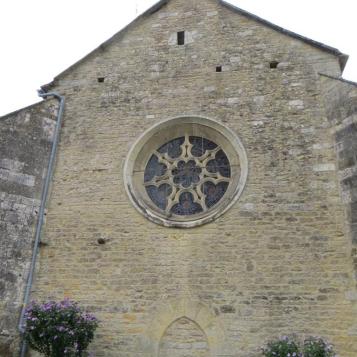 The place was fortified by Arnaud Duèze in 1318. He came from a very distinguished Cahors family, one of whom was an Avignon Pope, John XXII, who was Arnaud’s uncle. Pope John was described as “of small stature, scrawny and ugly, but with great ability and a prodigious intelligence.” One of Arnaud’s sons also became a cardinal.

It seems that the château played a role in the Hundred Years War, when life in this area was pretty insecure. Along came Bertrand de Gourdon in 1346, who had ramparts constructed around the village. The Gourdons were seigneurs of Cénévières, in the Lot, and became immensely powerful, owning lands across a wide area. By 1360 Jean de Gourdon (Bertrand’s son?) was seigneur of Puylagarde.

Jean’s hold on the château seems to have been short-lived. A warlike character called Ratier de Belfort usurped the lordship in 1369. He would make a colourful character for a novel. Ratier came from an ancient Quercy family and spent much of his career making war, changing sides several times in the process. He started out as a follower of the Black Prince and an officer of the King of England, before rallying to the French crown and finally becoming governor of Montauban. There, he distinguished himself by his aggressive and hard-line rule.

Ratier also appears in a document that I unearthed, which describes him pillaging the Priory of Laramière, not far from Puylagarde, in the 1380s with the help of “les routiers de Puylagarde”. During the Hundred Years War, routiers were mercenaries who grouped into large bands during periods of peace when they weren’t paid and extorted protection money and goods from the local population.

Jean de Gourdon got his castle back in 1381, although it isn’t clear if he had to fight for it or if the king granted it to him.

During the car rally, I also learned the difference between a gargouille (gargoyle) and a chimère. The two are often confused. A gargoyle’s function was to channel rainwater away from the walls of a building. A chimère was simply a mythical or grotesque animal that was an architectural decoration. Examples of both can be seen on the walls of the château de Puylagarde, although the gargoyle (below left) may have been moved from its original position, since it’s not obvious how the rainwater would have been channelled into it.

So I learned rather a lot from taking part in the Caylus car rally.

Thanks for reading. Shares are always appreciated.

“A delight to read”

“A beautiful piece of historical fiction”