Every month I post an update on how the weather has been, based on the statistics we have kept since 1998. Only this month I’m late with it and the Statistics Freak (aka my husband), whose baby all this is has been pestering me to do it.

To see the other weather posts, please click on ‘Weather’ under the Topics tab in the right-hand sidebar.

A quick reminder of our subjective weather assessment: we assign each day a plus if it’s fine, a minus if it’s bad and a zero if it’s indifferent or we can’t decide. In March, there were:

The graph shows the percentage of plus days each March for the past 12 years (the line is the trend). Six previous Marches were better than this one and six worse. The trendline shows that March is getting worse overall. When we first moved here, March was usually one of the better months.

Our rainfall stats go back to August 2004. This March was slightly wetter than average with 88mm compared with 80.1mm. However, it rained on fewer days – 10 compared with 11.9 average.

The first three months of this year taken together have been drier than average: a total of 190.5mm of rain fell compared with 223mm on average. We need a bit more to fill up the acquifers and avoid water restrictions later on.

There were seven frost nights in March, which is around average, although this can vary enormously. The better the weather, the more frost nights, since the skies are clear.

I can report that the cuckoo has now been followed by the hoopoe. I heard one on Saturday and the SF saw one in the walnut tree outside the kitchen door, with its unlikely feathered crest, like a Red Indian’s headdress.

Finally, can you guess what the picture below shows? 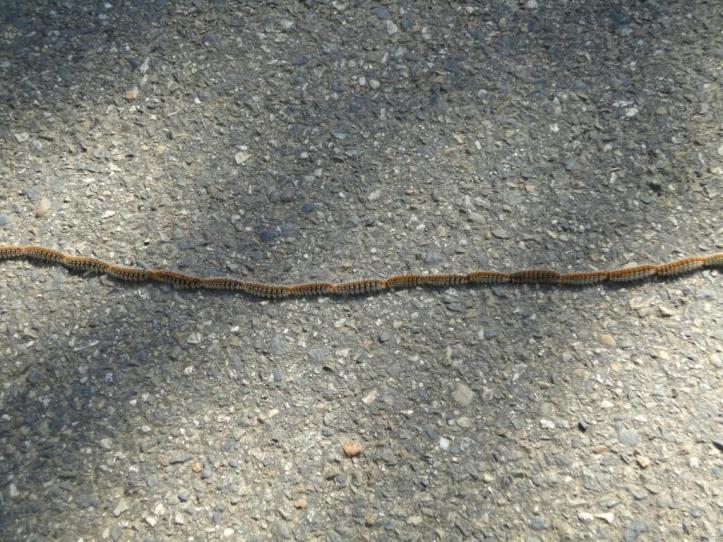 It’s a chain of caterpillars, seen on one of our walking group’s outings in March. I have never seen this before and have no idea what the function of this behaviour might be. However, having asked for further information, a reader kindly informs me that they are the larvae of the Pine Processionary Moth (Thaumetopoea pityocampa) or chenilles processionaires du pin in French.

Having done some further research (thanks to Wikipedia), it turns out that these caterpillars live together in tent-like cocoons that they spin in pine trees. They make nightly sorties in single file (hence the chain) to feed on the pine needles. They can wreak terrible damage on the trees and are a considerable problem in parts of central and southern Europe. They should never be touched (nor the cocoons), since the hairs on their bodies cause extreme irritation to the skin.

When the caterpillars are ready to pupate, they march in file down to the ground where they disperse and pupate singly just beneath the surface. This is presumably what they were about to do when we saw them on the road. The moths emerge in late spring.

Copyright © 2011 A writer’s lot in France, all rights reserved

Thanks for reading. Shares are always appreciated.

“A delight to read”

“A beautiful piece of historical fiction”